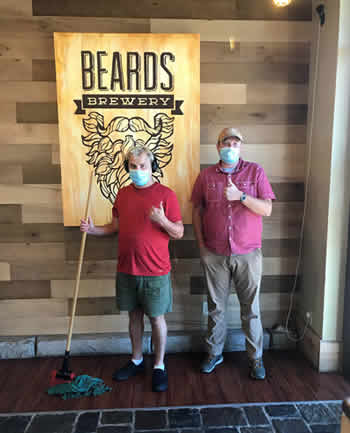 PETOSKEY — When the novel coronavirus pandemic forced the closure of many bars and restaurants from indoor dining service, it was felt by many.

Josh Sundmacher, a 27-year-old Harbor Springs resident and employee at Beards Brewery in downtown Petoskey, was among many who felt a void of not being able to work.

After all, working is all Sundmacher really likes to do, according to his mother, Jane Sundmacher.

“When they (Beards) called Josh back, he was so happy to go back to work,” Jane Sundmacher said. “He just got back into it like there was no break.”

Josh, who has been working at Beards since October 2019, is not your typical employee. Diagnosed with autism, the young man with a sweet temperament and big smile is non-verbal, although his communication is understood through his actions.

Jane had been looking for a job opportunity for her son for some time and was having difficulty landing something that would fit for Josh. That was up until she posted on her Facebook page a post saying “This hardworking young man needs a job.”

“I work at the health department and one of my coworkers is married to one of the owners (Ben Slocum) at Beards,” Sundmacher said. “She asked Ben and he said we’d give it a try.”

In coordination with North Country Community Mental Health’s self-determination model for services, which allows Josh and his family to manage, budget, hire and employ staff needed for his chosen lifestyle, Josh’s life and strong work-ethic is self-determined and self-directed.

“There’s this great program in which the state pays wages on a temporary basis to pilot a working situation,” Jane said. “We did that and we were all so nervous, they (Beards) were nervous and we were nervous, but Josh wasn’t nervous.”

Coupled with his job coach, Abby Hackman, Sundmacher has fit in wonderfully with staff at Beards, as coworkers have come together to support him during his two five-hour shifts during the week and another two-hour shift on Sunday.

“He’s one of those few people who’s always in a good mood when he’s working,” Hackman said. “I think it’s pretty hard to find someone who enjoys sweeping and mopping and he’ll just be singing and humming and happy the entire time. We’re usually the first ones in and by the time the rest of the servers and staff come in he’s already
walking around singing, humming and smiling.

“He puts everyone in a good mood,” Hackman said. “He’s the morale booster.” Jane noted Josh began working in October 2019, and in January, Beards decided to put him on its payroll.

“He got laid off because of COVID, which was a hard period for him and my husband (Doug), who was taking care of him. He (Doug) was trying to entertain him all day every day. They did a lot of firewood cutting during that time.”

No matter the size of the job, Josh handles each situation diligently and with laser focus. He knows typically Wednesdays are “towel days” and he folds up to 800 of them without a complaint.

“He loves to fold the towels and they save them for him,” Jane said. “He just likes to work. He has to be literally working all the time.”

When Josh is not working hard at Beards, he enjoys water recreation just as much, whether it’s boating, canoeing or relaxing in the family’s hot tub.

“He’s a bronzed beauty in the summer,” Hackman said. “At this point we’re more of a team than a coach situation. He doesn’t need coaching that much. This is a perfect fit here. Everyone is happy to see him and they give him highfives when he comes in.

“Since we’ve been working together, he’s gotten comfortable with me to the point he’ll hold the door open for me or get my water bottle for me,” Hackman said. “We’re a team.”

Julie Moran, community outreach coordinator at North Country Community Mental Health, said Josh is an example of a citizen with gifts, abilities and a strong desire to contribute — not to be excluded or limited.

Moran said communities thrive when its members invest in them, and Josh has contributed in that way as well by volunteering at the Manna Food Project as well as C. Kolfer Sporthorses.

“As the state of Michigan opens back up, the hope is that we remember our feeling of imposed isolation, exclusion and perhaps economic insecurity, and that we open up to focus on the strengths and abilities of those with a mental health, intellectual or developmental disability,” Moran said. “This will allow them the opportunity for a sense of productivity, appreciation and belongingness that Josh and his team have fought so hard to gain for him.”

For Slocum, hiring Josh seemed like something the business should do. Josh’s earphones became part of his work uniform and Slocum said he was task-focused and there was nothing he didn’t like to do.

Slocum also offered advice to other employers regarding a pool of employees that might be overlooked.

“Take a chance. Roll the dice,” Slocum said. “If it doesn’t work out, it doesn’t mean you shouldn’t try again. The risk is not as great as perceived. If we don’t try, we won’t move forward and make the world better.”